PINNACLE™ was developed for everyone serious about getting the most out of every single workout while maintaining the integrity of what goes into their system. We're betting you wouldn't put cheap gas in your Lambo (we can all dream), so why would you put cheap, under-dosed ingredients into your body?

Let us walk you through what PINNACLE™ can do for you and the research that proves it.

Our labels are all categorized into blend formulas to better help you understand what ingredients provide what qualities to the overall product. Every blend contributes to PINNACLE™, no fillers, no junk, only ingredients your body will benefit from.

First up, is the Performance Blend, stacked with ingredients that have proven their worth time and time again. Each one provides a role in your performance.

Research has shown that supplementing with L-Citrulline Malate can enhance anaerobic performance as well as reduce muscle soreness.

In a study published by the Journal of Dietary Supplements, resistance-trained males were subjected to a randomized, double-blind study where they were assigned either a placebo pill or 8 grams of L-Citrulline Malate and two weeks later ingested the other. The 8 gram dosage of L-Citrulline Malate proved to increase the number of repetitions performed for each exercise provided (Case 1, below). The clinically tested dosages that prove effective range from 6-8 grams, PINNACLE™ being dosed at 8g.

In a similar study by the Journal of Strength and Conditioning Research (Case 2), the conclusion found was that males in the group given Citrulline Malate (8g) vs. the placebo were able to perform a significantly higher number of reps in lower body exercises.

L-Citrulline Malate is the choice over L-Citrulline for several reasons. The malate, which contains malic acid, does not need to be loaded to see the benefits from it. It is also absorbed much faster and easier on the digestive system. Research has also shown that adults given an 8 gram dosage of Citrulline Malate can see a significant decrease in muscle soreness (Case 3), as well as limit the increase in muscle fatigue induced by bacterial endotoxins (Case 4)

Research stands behind this popular choice for pre-workouts as it is a key component in aiding lean muscle growth. How? During high-intensity exercises acid begins to build up in your muscles and limit muscle contraction, thus endurance. When you consume beta-alanine it turns into carnosine, which buffers the acid. This will aid in strength and endurance during a workout. CarnoSyn® is a high-quality, branded beta-alanine. Tested clinical dosages range from 2-6.4g, PINNACLE™ being dosed at 4g. At this amount, you will most likely experience paresthesia, a harmless tingling sensation.

As you can see in Case 1, the Journal of the International Society of Sports Nutrition performed a double-blind study on college-aged men, testing for the effects of combining beta-alanine with high-intensity performance. The study concluded that supplementation of beta-alanine may further enhance HIIT, improving endurance and lean body mass.

Are you interested in going the distance? Case 2 may be for you. When involved in endurance competition, often the final sprint can make or break a winner. This is where beta-alanine can help according to a 2009 study by Medicine and Science in Sports and Exercise where they found the ingredient-led to significant enhancement in the final sprint of exhaustive endurance events.

Most of us are not super-humans, so we end up fatigued at some point during strenuous exercise. In Case 3, the Journal of Applied Physiology concluded that beta-alanine can significantly attenuate fatigue during repeated isokinetic contraction periods in trained sprinters. In other words, they had male sprinters perform 30 knee extensions, and those taking beta-alanine had a significant increase in carnosine within their calves, resulting in much better torque in the fourth and fifth bouts.

In the first case study below, there was proven evidence that muscle strength and weight lifting were improved with the supplementation of creatine monohydrate. While in Case 2, elite Brazilian soccer players were tested for lower limb muscle power after progressive training. The findings showed that supplementation of creatine monohydrate prevented the decrease of lower limb muscle power after such training.

A study by the Journal of Strength and Conditioning Research/National Strength and Conditioning Association (Case 3) measured how creatine supplementation affected critical power and anaerobic working capacity on college-aged men. What they found was supplementation with creatine may enhance the effects of HIIT and on endurance performance changes.

This one is pretty indisputable how much of a benefit it provides to performance, including strength and endurance. However, the benefits don't stop there...as betaine anhydrous has also been suggested to aid in muscle growth, making it all too good to pass up. Clinically proven dosages range from 1.25g to 2.5g, PINNACLE™ being dosed at 2.5g.

In a study by the Journal of the International Society of Sports Nutrition (Case 1) betaine anhydrous not only improved muscle strength of those tested, but also the form.

In another double-blind study, findings were similar. Supplementing with betaine anhydrous resulted in an increase in total repetitions as well as volume load during a bench press exercise. (Case 2)

After a two-week study, the European Journal of Applied Physiology (Case 3) found that betaine supplementation enhanced the anabolic endocrine profile and the corresponding anabolic signaling environment. This suggests that there was increased protein synthesis. 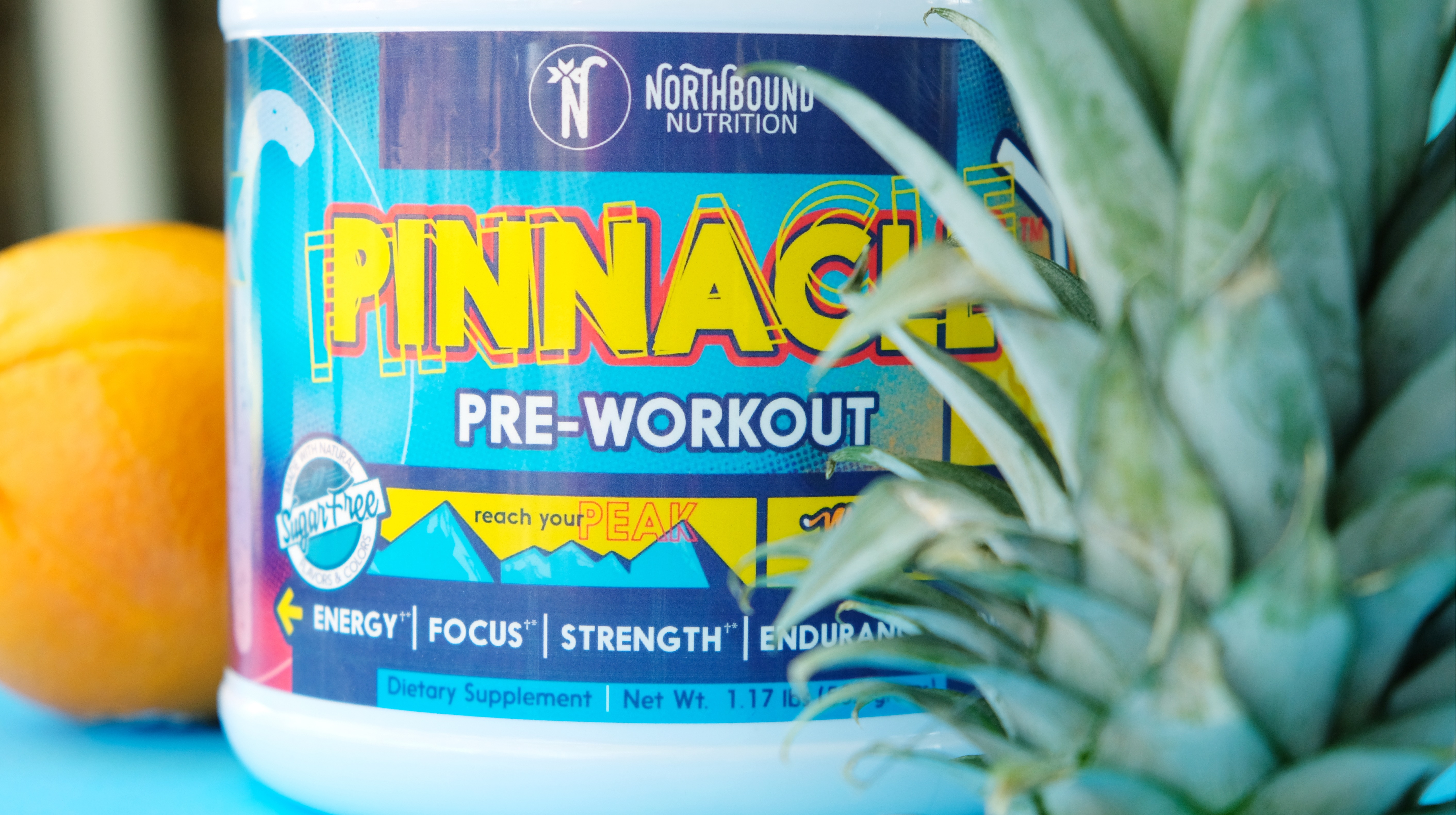 Next is the Vascularity Blend, with three key ingredients to improve vascular function during a workout. Each of which has a unique contribution to PINNACLE™.

Also known as Pycnogenol, is extracted from the French maritime pine tree which exhibits anti-inflammatory, antioxidant and anti-platelet properties. What does this mean for your next athletic event or workout? Blood flow to your muscles is increased, which means oxygen to the muscles is increased. This allows you to move more weight or exert more force over a longer time frame. Clinically tested dosages range from 40mg-200mg, PINNACLE™ containing 200mg.

In Case 1 you can read how pine bark extract increases nitric oxide production, further supporting blood flow to your muscles.

In this placebo-controlled double-blind study by Life Sciences (Case 2), hypertension (high blood pressure) was measured in patients after 12 weeks of taking pine bark extract. In conclusion, those who took pine bark extract over the placebo were able to significantly reduce the dose of nifedipine.

Proof that pine bark extract helps reduce oxidative stress lies in Case 3, where the European Heart Journal did a study on patients with coronary artery disease.

As a polyphenol, this gem not only works as an antioxidant but also as a nitric oxide booster (Case 1). Both of which anyone in the industry could benefit from in a pre-workout. Clinically tested, effective doses range from 150mg to 300mg, PINNACLE™ being dosed at 200mg.

There was another interesting study done by the Journal of the Science of Food and Agriculture (Case 2) that proved grape seed extract to benefit women who swell in their legs during extended periods of remaining seated.

If you're worried about exercise-induced oxidative stress then this next study is for you. (Case 3)

Spectra™ is an innovative ingredient that fights potentially dangerous free radicals that can be brought on from exercise. As Case 1 by Food and Science Nutrition suggests: "Unique activity of SPECTRA™ suggests the potential for the use of the supplement in the modulation of oxidative stress, NO bioavailability, inflammatory response, blood glucose levels, and ultimately supporting “optimal health.”" Also, proven in Case 2, to reduce free radicals in people after consuming Spectra™. The clinically tested and proven dose of SPECTRA™ is 100mg, with PINNACLE™ being dosed at 100mg.

We created a driving blend to keep you driven to push yourself through the entire workout. Some of the ingredients offer much more than just that intense focus, so let us explain.

Proven time and time again, L-Tyrosine always comes up as a winner in the search for raw focus. The production of dopamine and noradrenaline is increased due to tyrosine. The combining effect leads to increased focus and mood while reducing the feeling of stress and anxiety...either of which can wreak havoc on a workout. If you're looking for one of those workouts where you're so zoned in on what you're doing that you realize 20 minutes later your song has been on repeat...this will do it. Proven effective clinically studied doses of L-Tyrosine are 500mg - 2g. PINNACLE™ contains 1.5g.

L-Tyrosine was tested by Aviation, Space and Environmental Medicine for the effects of tyrosine on cognitive performance after sleep loss (Case 1).

We can all expect some stress from time to time, but one of the last places you want it sneaking up on you is during a workout. In Case 2 Brain Research studies the effects of tyrosine on exposure to acute, uncontrollable stress.

Think all caffeine is created equal? Think again. Ever had jitters from caffeine? Or crashed hard when it began wearing off? Synthetic caffeine is absorbed through the digestive system at a much faster rate than plant-derived caffeine. This makes for a quicker spike, but also leads to a more harsh crash. A quick tip: if you see the word "caffeine" on an ingredient label that is unaccompanied by the source, you're most likely looking at synthetic caffeine. What does all this talk about organic caffeine have to do with your workout? Well, it has been proven to enhance energy, focus and endurance...all critical for a solid workout. The clinically tested doses that have proved effective range from 3mg - 6mg per kilogram of body weight. We have PINNACLE™ dosed at 325mg, if you're caffeine-sensitive or on the lighter side of the spectrum we recommend starting with a 1/2 scoop.

Along with the typical focus and energy, we expect to see from caffeine, there has also been a proven thermogenic response that can result in weight loss when combined with a low-calorie diet and exercise regimen (Case 1).

Caffeine has also been proven to enhance the metabolic response in exercise-trained people (Case 2). Along with beneficial metabolism responses, you can also count on caffeine to improve your mood (Case 3).

This next study is a good one, measuring the accuracy of decision making and agility performance after simulated team-sport exercise with the aid of caffeine. In other words, the participants either consumed a placebo or caffeine, then played in a team game for 20 minutes, 4 times through. After each 20 minute session, the effects were measured. Across the board, the caffeine ingesting group scored consistently faster scores. Read more about it in Case 4. Considered a natural source of choline, Alpha-GPC provides a multitude of cognitive-enhancing properties. We specifically chose it for focus improvement qualities in combination with the neuro connection with muscle movement. In other words, while being focused you should also be able to experience stronger contraction in muscle movements, which will also lead to muscle growth. The clinically proven dose ranges for ALPHASIZE® Alpha-GPC are 200mg - 600mg, PINNACLE™ dosed at 300mg.

Another study (Case 3) confirmed that taking Alpha-GPC was able to antagonize impairment of attention and memory induced by scopolamine.

And last, but not least, is a study (Case 4) on the effect of alpha-glycerylphosphorylcholine, caffeine, or placebo on the marker of mood, cognitive function, power, speed, and agility.

A popular ingredient, and for good reason. Bioperine® has been used to enhance bioavailability for decades and was found to enhance absorption of nutrients by at least 30%. That's pretty substantial. The clinically proven dosage is 5mg, PINNACLE™ containing 5mg.

In Case 1 you can read how piperine, an alkaloid derived from black pepper, increases serum response of β-carotene during 14 days of oral β-carotene supplementation.

In a separate double-blind study by the Journal of Nutritional Biochemistry, (Case 3) piperine that was at least 98% pure was used to evaluate the plasma levels of the coenzyme Q10 after being supplemented orally.

Curious about how piperine can enhance the bioavailability of resveratrol? See Case 4.